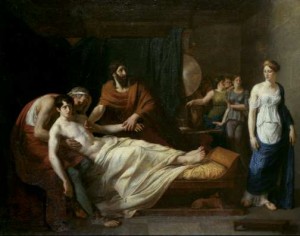 When I was four my little brother had the chicken pox.  I remember him lying on the couch screaming and screaming, with little pink dots all over him.  I’m sure my parents were around somewhere, but as he lie there with me kneeling next to him, I thought, “He’s alone and he’s going to die.”  My older brother’s little friend who was probably no older than 6 or so, died that year.  I went to the hospital with Bronchial pneumonia.  Death must have been on my four-year-old mind.

Over the years, I have come to realize that I, like most people, do not particularly have a strong fear of the very moment of death itself.  What freaks me out is the decline right before death.  Whether it’s bleeding all over and being in pain from a car accident or dying a long slow death through illness, these seem like very difficult things to me.  What I think is, “What will happen to my mind?”

When I read The Butterfly and The Diving Bell by Jean-Dominique Bauby and when my Zen teacher, Daniel Doen Silberberg Roshi  tells me about his paralysis with Guillen-Barre syndrome, I struggle to picture myself in the same position.  If I could not move or speak but my mind was entirely intact and active, how could I bear it?  My mind!  What would happen to my mind?

My exploration has lead me to believe that my mind is not as valuable as I thought.  In fact, the very existence of my mind is a highly theoretical and un-graspable concept.  So, I’m trying this from a different angle.  What if I let go of my mind?  This is what Zen teachings are all about after all.  However, DOING it in the everyday is not an easy thing.  Simple, but not easy.  I’m an attorney and I own a small law firm.  I’m very very attached to my mind.  Dropping it feels like… like dying?

So I have committed 2010 to ONE SINGULAR idea.  I will drop off thinking as often as I can remember to do so and I will actively sit in meditation for at least 1/2 hour per day and during that time, I will let go of my mind.  Even though it has not yet been a month of this, I already feel an amazing opening happening.  I don’t know what it means, where it’s going, but I do know that everything is shifting to a deeper peace.  I’ll keep you posted.  Wish me luck!